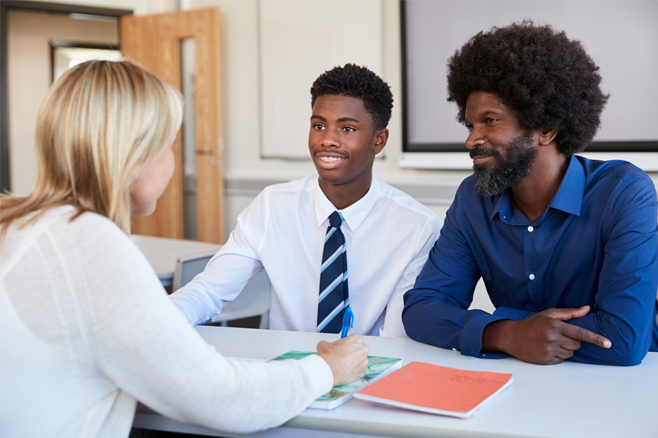 Education is increasingly viewed as a shared responsibility of educators, families, and communities. Schools, parents, and the community should work together to promote the health, well-being, and learning of all students. When school involve parents and engage community resources, they are able to respond more effectively to the needs of students.

Family and community involvements foster partnerships among schools, family, and community groups and individuals. These partnerships result in sharing and maximizing of resources, as well as a strong belief that all families, regardless of level of education, socio-economic status, and race or ethnicity can contribute to all student learning and development. When schools communicate well and often, parents and communities are not only informed but feel like they have an active voices in their school community. Additionally, they build a culture of inclusivity and eliminate feelings of distrust, uncertainty, and hostility. When educators fail to communicate fully, misinformation, misinterpretations, misunderstanding, and mixed messages can cause a system breakdown. But when school leaders communicate effectively, students learn, parents and community members understand and support what the school is doing, and the process of teaching and learning moves forward.

Jimmy was in 8th grade when his mother, after using heroin for several years, had recently and unexpectedly left Jimmy and his father and moved 200 miles away. Despite her addiction, she had been the primary school contact and was inconsistently present at Jimmy’s school events. The school social worker attempted to reach out to Jimmy’s father, Mr. Cunningham, on a few occasions following the mother leaving. After a few months, Mr. Cunningham finally called back. He agreed to come in to talk to the counselor, but always canceled or just didn’t show up. Knowing the importance of parent involvement, the social worker didn’t give up. He called Mr. Cunningham and was never upset with him for missing the appointments. Instead he communicated with Mr. Cunningham in a way that showed understanding and compassion. He also talked with him about Jimmy, but didn’t press an in-person meeting. He made sure to let him know in what ways Jimmy was doing well, and in ways he could use support from him. He indirectly educated Mr. Cunningham about the importance of his expectations for his son and how his involvement would benefit him. After communicating this way for several months, during one of their calls Mr. Cunningham asked if he could come up to the school sometime to finally meet in person. The social worker told him he would love that and to stop by anytime. Later that week, Mr. Cunningham came in when he dropped off Jimmy and brought the social worker a cup of coffee. All he said was, “Thanks—you didn’t push me. I just needed some time.”

The Power of Constant Curiosity with Families

Watch the complete panel discussion when you sign up for your free trial of StarrPASS at watch.starr.org. Cancel anytime in the first 7 days!

Home » News & Resources » Parents as Partners in the Classroom

Reach every student. Every day.