As Starr celebrated its 100th anniversary of serving children in 2013, families, and communities, it was—and remains—important to recognize the multitude of alumni our organization has so deeply impacted.

One of these alumni, Donald Potrafka, a Starr alumnus from 1930, sent Starr a reminder of why it is dedicated to the mission of creating positive environments where children and families flourish. In a letter attached to a recent Starr alumni survey, Donald told stories of what it was like at Starr in the 1930s and how those experiences changed his life, including this excerpt: 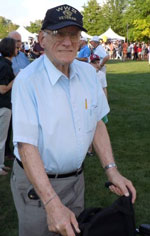 “Why I came to Starr Commonwealth for Boys on Oct. 17, 1930, I didn’t know at the time. Now I realize that it was the results of my father and mother being divorced in 1925 at Traverse City, Michigan. My mother could not watch me and my sister and also work long and late hours at the telephone company in Alma, Michigan. I can recall being shuffled around between staying with my mother, then a stay with an aunt in Traverse City and a short stay with my father, who worked on the highway near Lake City, Michigan.

With limited supervision, a young boy under 10 years of age surely can get into trouble. Although I don’t believe there were any serious troubles which I might have caused the family. Apparently, it was decided that a home like Starr was needed to care for me and guide me through those tender years of my youth. As “there is no such thing as a bad boy,” Uncle Floyd opened his arms and heart to me in that fall of 1930. 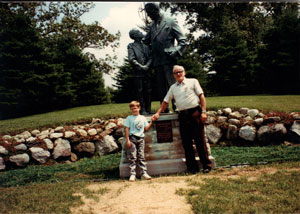 I look back now on those two years at Starr as one of the great experiences of my life.

When I arrived at Starr, there was the Gladsome house where Uncle Floyd lived and the Old Barn down by the lake which was the start of Starr Commonwealth. There was Newton Hall, where I first lived, and Wilcox Cottage, where I lived just before leaving Starr. Boys were grouped by ages for each cottage with a housemother for supervision. One building was used for offices, school and chapel. The Hillside Commissary was where all the meals were prepared. Food was grown on the Starr Farm located along the main road leading into Albion. The older boys worked on the farm and went to high school in Albion.

One of our big days was Starr Tag Day. We were always excited by that, as it meant leaving Starr in a big truck early in the morning for a nearby town to give out tags for donations received from people on the streets. One of the towns we went to was Marshall, which had a large water fountain with changing colored lights. We could see these lights for a long distance as we came into the town. It was so very pretty from a distance.

Each of us was given a bunch of round red tags with a string on it and a can with an opening in the top so money could be put in the can by the people who wanted to help us. We would ask people if they would help our home, and when they gave us money we would give them a tag to wear and would be sure to say ‘thank you’ each time. We always wanted to see who had the heaviest can at the end of the day. We usually had sandwiches and soft drinks brought to us. It was like going on a picnic.

I know Uncle Floyd would go out to talk to groups to get people to help with the needs of Starr. A friend of mine recently told me of the time that Uncle Floyd came to Traverse City, Michigan and told the people about his home for boys. She said that everyone marveled at the work he was doing and supported his work.

Starr would like to thank Mr. Potrafka for his kind words, as well as his family for contacting Starr about the desire to share his story. There are hundreds of alumni who share Potrafka’s passion and gratitude toward Starr. We are always happy to hear of how the organization helps children and families reach their potential, and we look forward to serving more communities in our next 100 years.