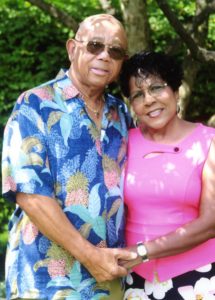 When they first came to Battle Creek in 1980, Joe and Clara Stewart knew that they wanted to do one thing: help children. Joe started out working for the Kellogg Company as the Director of Child Nutrition, which is where he connected with Arlin Ness, then-current President and CEO of Starr Commonwealth and the organization as a whole. “Starr is the kind of place where once you get involved in it, if you believe in the uplifting of people and children, you believe in Starr.”

“I was with the Kellogg Company and we would always support Starr’s program,” said Joe. “We would always get invited to Founder’s Day [on Starr’s Albion campus], and you can’t go to the place and see what’s happening there without feeling a sense of the value it has for kids.”

Through Joe’s involvement with the Kellogg Company, the Stewart’s became more familiar with Starr and its programs, so much so that in 2001, Arlin asked Clara to serve on the Board of Trustees. She retired from the Board in 2010, but their son, Erick Stewart, still serves today.

“When I first started with Starr I was told [by people in the community], ‘oh, that’s a school for bad boys,’ and I told them that needed to change,” Clara remembers. “You don’t deal with bad boys. You help children help themselves.”

The Stewart’s commitment to the children of their community took on another new form in 1999, when Joe, along with former Starr Presidents Arlin Ness and Martin Mitchell, got together with members of the Battle Creek community to found the National Resource Center for the Healing of Racism, then called the Institute for Healing Racism. “As a black American having lived in this country,” Joe said passionately, “the whole issue of racism is perhaps the greatest weakness or disease we have. Unless we can get over that, we will continue going into the future destroying the potential of human beings for reasons we don’t even understand.” Through Kellogg and Starr, the Institute for the Healing of Racism was able to reach 1500 people in Calhoun County, creating lasting relationships among participants and opening their eyes to the ways in which inequality can be ingrained in each of us. “That kind of involvement on the part of Starr and the IHR is focused on one of the greatest needs now in the human family, and we particularly need that these days, when hate and racism has become front and center,” Joe said.

The couple’s generosity and passion for the community continues to this day with their recent donation to the Binder Park Zoo to build the African Tented Camp and Zamani School. The new space creates a unique opportunity for patrons to stay overnight and learn about Africa, its history, and its culture. Their hope with this exhibit is to teach the community about African culture and cultivate “Ubuntu”, which is the South African philosophy of “humanity towards others.”

To honor the many gifts this great couple has shared with our community, Starr is excited to announce that Joe and Clara Stewart will be receiving the Oneness of Humankind Award at our 105th Anniversary Celebration on October 6, 2018. To learn more about the event or to buy tickets, you can visit www.starr.org/105.