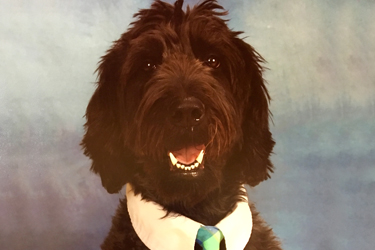 *Student identifying info has been changed to maintain confidentiality.

It’s 7:45 on a Tuesday morning. The call that comes over my walkie talkie is not unfamiliar. “Skillet is needed on the bus. Skillet is needed on the bus.” Skillet, a tall, lanky golden doodle/labradoodle mix (Skillet’s staff photo above) is already on his feet before I take his leash and tell him that Sean needs his help. Sean is a middle school student with autism whose anxiety and overstimulation manifest as self-injury, verbal aggression and physical aggression. Bus rides can be so difficult that he wears a safety harness to and from school.

When Skillet and I get on the bus, I can tell it’s been a rough morning. Sean is lying under the seats. He has removed his shoes and socks and thrown them at his teacher and bus driver who’ve been trying to help him transition into the building. Sean is completely dysregulated and in full survival mode; He’s alternating between spitting, yelling obscenities and biting himself.

Skillet pokes his big, goofy head under the seat next to Sean’s face, and so begins the de-escalation routine that they have established. Skillet licks Sean on the cheek until Sean reconnects and becomes aware of Skillet’s presence. Sean begins to laugh and then says excitedly, “Skillet the dog!” He reaches up to hug and pet Skillet. I suggest that Sean might be better able to pet him if he sits in the seat. Sean gets off the floor, into the seat, and Skillet hops up to sit beside him. In a matter of moments, Sean is spontaneously asking for his shoes and socks, apologizing for his behavior and saying he’s ready for breakfast. We have learned that when Sean becomes highly dysregulated, Skillet can usually calm him by activating his social engagement system in a way that other staff members can’t.

I’ve worked in this therapeutic public school program serving students ages 5-22 for the past 17 years, and the past five have been with Skillet. His presence adds a level of playfulness and calm that we hadn’t experienced before and that is uniquely canine; he often changes the mood in an entire room just by entering. When we first introduced Skillet as our program’s therapy dog, we knew the benefits to expect: increased social interaction, increased self-esteem, a calming presence, an added tool for emotion regulation, etc. What surprised us was that Skillet would make his own constant bids for connection and engagement with students. He would form unique relationships with certain students and that in times of crisis, he would become their go-to staff member. It was a little over a year after he started with us that we realized Skillet was more than an extra tool in our tool box: he was a member of our team.

I received a call from a teacher asking if I could bring Skillet down to her room for a visit ASAP. Jacob had been on edge all morning. Now, he had stopped responding verbally and was sitting in his seat, staring straight ahead and kicking the table methodically with increasing force. He wasn’t responding to her attempts at de-escalation, and we knew this indicated a meltdown was imminent. When Skillet and I entered the room, eight students were seated around two tables. Skillet went around the tables greeting each child, and the students responded with pats or giggles. Skillet came to Jacob, who just stared straight ahead and continued kicking. I watched as Skillet finished greeting the other students, and then circled back around to Jacob, laid at his feet and let out a big sigh as if to say, “No worries – I got this.” I watched incredulously as Jacob put his head down and began to pet Skillet, lightly at first, and then gradually more enthusiastically. Skillet and I stayed for about 10 minutes. When we left, Jacob was back on task, engaging with others, and he made it through the remainder of the day successfully. Jacob was one whose private logic told him that adults were not to be trusted. When triggered, he went into a survival response that took hours to regulate. Skillet had been able to help him feel a sense of safety, unconditional love and acceptance that he couldn’t receive from any other staff at that moment. 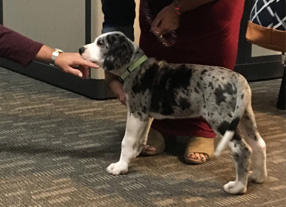 Therapy dogs create opportunities for growth and healing for some students that wouldn’t be accessible otherwise. As Starr Commonwealth adds Baloo (left, at 7 weeks old), the therapy dog, to their team, Skillet and I are cheering! We can’t wait to hear of the connections he makes and the lives he impacts.