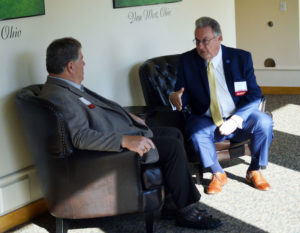 The Starr Alumni Association has been an asset for former students for many years, providing not only a network but an emotional support system for our youth after they leave our programs. While planning our Alumni Cookout, we had the opportunity to talk with two former presidents of the Alumni Association, Dr. Jim Pelt and Mr. George Wilson, about their dedication to Starr and what the Alumni Association means to them.

Dr. Jim Pelt, who was a Starr student from 1955 to 1957, was the first president of the Starr Alumni Association, and worked with former Starr president Arlin Ness to establish the group. “I attended Founder’s Day, there were some other alums, and we started talking.” Jim said. “We started getting together once a month on the Albion campus, about a half a dozen of us, and talked about an Alumni Association.” Encouraged by Arlin Ness, who knew of Uncle Floyd’s desire to establish such a network, Jim and a large group of former Starr boys held their first formal meeting, and Jim was elected to be the first president of the association.

With this role came a position on the Starr Board of Trustees, and Jim served in both functions for eleven years. He was succeeded by George Wilson, who was a Starr student on our Albion campus from February of 1961 to August of 1962.

Before becoming the Alumni Association president, George and his wife visited Kutsche Cottage on a monthly basis to mentor students. “That’s when I saw what I believed to be some real promising things that were happening,” George remembered. “They had meetings in cottages at the end of each day where they would have to resolve any personal issues that they had with one another and be open and candid about discussing problems that they had. I became quite impressed with that.”

Both men spoke of how Uncle Floyd instilled in them a drive to give back. “The most important thing, I would say, when we think about giving back, is that it’s always about service. Serving other people, which was what Floyd Starr was,” George said about their desire to give back to the students.

“George and I were very fortunate in that we knew Uncle Floyd,” Jim explained. “Students today only hear about him – they didn’t know him. He was a powerful individual. Not a big man – small in stature – but a giant.”

Dr. Jim Pelt and George Wilson will both be receiving the 2018 Starr Alumni President Emeritus Award at Starr’s 105th Anniversary Celebration. For more information about the event, please visit www.starr.org/105.