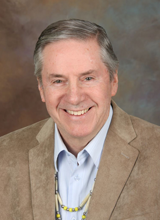 Why are you #DrivenToHeal with Starr Commonwealth? “I first met Floyd Starr in 1965 when he gave me permission to spend time on the Starr campus gathering data for my University of Michigan doctoral dissertation. This study showed that boys with “impaired relationship capacity” had experienced disrupted family bonds which impacted learning, behavior, and conscience development. I could see how the Starr environment helped many of these youth heal and thrive, and talked with my doctoral advisor about someday working at Starr. In 1967, I was a professor at the University of Illinois when Floyd Starr announced his retirement. The Starr board retained the University of Michigan to conduct an executive search, and I was invited to apply. While I was the youngest final candidate, I had worked extensively with troubled children, and my stint on the Starr campus helped me understand the challenges faced in this leadership role. After fourteen years at Starr, I passed the presidency on to Arlin Ness. Returning with my family to my native South Dakota, I continued to support Starr’s mission in consultant roles. It is exciting to see a new generation of inspired leaders bring Starr to world-wide prominence in helping hurt kids heal.”

Fun facts about Larry: “In my early years as president, Floyd Starr was still active in working with donors so I could commit my time to developing programs for an increasingly challenging population of troubled and traumatized youth. Thus, I was able to personally interviewed all students for admission to better understand their special needs. One such youth was John, a tall 12 year old referred by the Cleveland juvenile court after fifteen failed placements. John had been removed from his addicted mother at age eight and successfully outwitted all professionals and caregivers who passed through his world. His trajectory was documented in reams of pessimistic reports giving him every diagnosis imaginable. The court brought this boy who had become an expert at outwitting adults for an intake interview. I like that kind of youth, but my attempts to communicate with him were met by stony silence. After perhaps an hour, John swore at me saying he wasn’t going to talk and wouldn’t stay in this (expletive deleted) place. So he returned triumphantly to Cleveland until authorities finally forced him to enroll at Starr. His plan was to run away, but a young staff member built a connection, and John remained. He completed the program and then grew to independence in a Starr group home, attending high school in Albion where he became a basketball star. John went on to college and after some rocky years, married a school psychologist and started his family. Today, this Starr graduate is Dr. John Seita, professor of social work and youth development at Michigan State University. He is also an author on resilience and trauma, an expert on both sides of the desk. Transforming lives is still the mission of Starr, now in its second century.”