Many students who come to Starr Commonwealth have rough starts to life: histories of emotional and physical abuse as well as neglect are unfortunately common. Ted Johnson’s story starts the same way, but through the intervention of Starr, he has been able to move on and give back to his community.

“I’m very proud of having lived there and everything they did for all of us. Starr was the happiest place in the world for me, and it was the linchpin that launched me on the road to maturity,” says Ted.

“My introduction to Starr Commonwealth in 1953 came by way of Macomb County’s juvenile placement officer, Melvin Schurig. I was sincerely surprised when we turned on to Starr Commonwealth’s campus grounds early that afternoon. The landscape was immaculate, trees trimmed, grass mowed, and a scattering of flowers here and there. As we drew closer to the administration building I saw Lake Montcalm, and spotted a group of boys fishing, and two other teenagers strolling along the shoreline, snatching up stones and skipping them across the waters. Despite the distance, I heard them kibitzing back and forth and their echoing guffaws. What seemed amiss was no adult supervisor, and no fence in sight. I was impressed.”

Ted spent two years at Starr in Ingles Cottage, now named Mendelssohn. “Ingles Cottage struck me right out of Walt Disney’s palace from the movie Cinderella. Minus the towers, it was stately and handsome to the last brick,” remembers Ted.

From the beginning, Ted learned from his classmates and from Uncle Floyd important lessons that he would carry with him forever. While working in the Central Kitchen, Ted recalls how Mrs. Tiedge, the head  chef, rewarded him with slices of pie or extra breaks when he finished his duties faster than the other boys. “Doing what she asked quickly and correctly always provided a reward within itself. That lesson instilled my focus, work habits, my determination to always perform the best I can.”

It was not always work on our campus, though. Ted told us a story about participating in the Soapbox Derby in Albion. “Two counselors came to our class room, asking if anyone would like to race in the Soapbox Derby. A pair of us raised our hands, and within the week we began constructing our cars. Starr’s wood-shop teachers taught us how to safely use the woodworking tools, taught us how to fabricate our racers, while they stood aside guiding us verbally. I raced my car that summer, and though I didn’t win the heat, I felt pride in what I had accomplished. Starr Commonwealth provided the tools, guidance, a triple helping of encouragement, which imparted within me a strong sense of personal value.”

By 1955, the courts had decided that it was time for Ted to return to his parents. With that history of domestic abuse, though, Ted didn’t want to go back. “Uncle Floyd did all he could to get the judge to retract the order but no dice. My mother and stepfather grabbed me and took off north to Shepherd, Michigan. I ran away on my first opportunity and headed for Florida.” 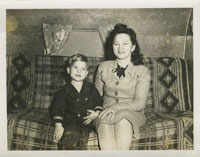 Ted began moving up in the world, first with his own business, and quickly moving on to training managers at local restaurants. He and his wife, Maria, ended up moving to Texas when he became Vice President of Los Tios Mexican Restaurants. Today, he and Maria operate a home for the mentally and physically handicapped in need of special care, which opened on April 1st, 1985.

Ted started giving back to Starr in 2003, and continues to give regularly to the organization that changed him. “I support Starr because I knew what they did for me, taking me in and providing refuge, training, encouragement, demonstrating to me that I was a worthy person, and I want to help other boys and girls.”

“Floyd Starr – with God’s guidance – has contributed a major role in rerouting a disadvantaged kid into a blessed life. And not only myself, but scores and scores of other kids who were, and are, in desperate need of help. Though Uncle Floyd has passed on, his legend lives on, and I’m proud I came under his tutelage.”